I love everything about fishing from the planning, staying up late prepping the gear, getting up early catching bait, stalking the fish with friends, getting the strike, the fight, the landing, the photos, the filleting, the cooking and eating, sharing the fish tales, but what I love the most about fishing are the God moments, the witnessing of the amazingness, beauty, order and power of the Creator through his creation.

I have had plenty of God moments this month with with some epic snook and red fish , and tarpon fights….

….., but the one that is etched in my mind most recently is a sick tarpon bite that happened just before sunrise with my client and good friend, Kevin.   Kevin was down from New York staying on the beach with some family and friends and I meet them at their condo early to target tarpon and reef fish.  We had a good trip catching grunts, flounder and sea bass, but the fish Kevin wanted most remained elusive, the tarpon.  The tarpon were stacked up thick that morning but had no interest in touching our bait.

I suggested to Kevin that based on the tides we should reload for later that week and see if the odds would swing in our favor.  The winds and weather held up and Kevin and I launched before sun up on calm slick waters to intercept the tarpon off Indian Shores armed with just a few pins and a lot of excitement.  As soon as we got out the tarpon where holding the exact same pattern they had been in three days ago.  We found out quickly that this morning they were ready to eat as our first bait got whacked when we tossed it near a pod of 20-30 fish daisy chaining.   To our frustration the tarpon spit it immediately.  The same thing happened to our second bait.

I had just szabikied up a fresh pinner and gave it to Kevin.  The pod had resurfaced a few feet off our stern and I told Kevin to u turn and put some space between us and the pod before recasting.   Once Kevin had re positioned he launched the pin suspended on a cork into the pod.  This time a tarpon hit it immediately and went air born.

I will remember the image the rest of my life as it is etched into my minds eye.  This tarpon rocketed out of the water like the “King of the beasts”.  He began an vertical climb lifting his colossal frame majestically  4 feet off the water. He looked every bit of 180 pounds and easily 6ft long.  As he hovered almost defying gravity, every color of the first light of sunrise lit up his sliver armor plated scales: the purples, oranges, light blues, yellows and pinks all captured on each individual scale and reflected back to us.  The moment for me developed in slow motion with the tarpon hanging almost weightlessly.  As the tarpon reached the peak of his ascent, he thrashed his head back and forth then came crashing back into the water snapping the leader as if to say, “you messed with the wrong fish”.  Then all went silent.  It was one of the most serial moments in my 40 years of fishing.

I know it was probably 10 seconds of my life but it will be a memory I will have for a long time, and one that gives me more awe and wonder for our God and reminds me how blessed we are being a part of his cosmos!!

The morning was not over for us.  Minutes later were locked up with another tarpon from a second pod 5o yards away.  This fish was in the 100lb class and Kevin battled him hard for over an hour.  We were able to land, get pictures and release the fish. 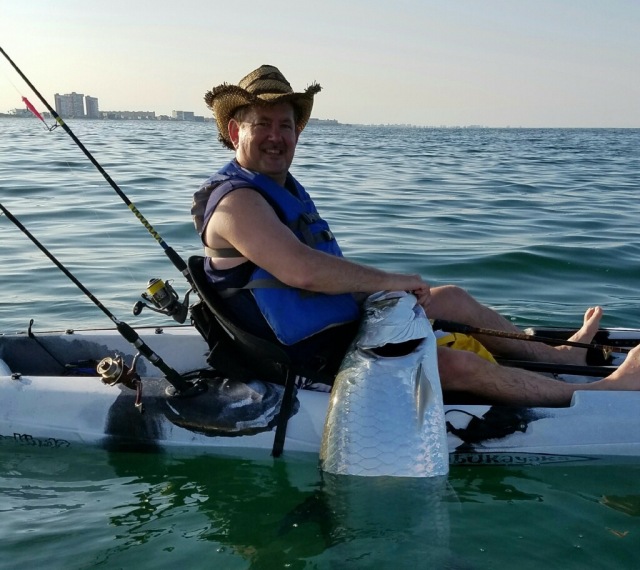